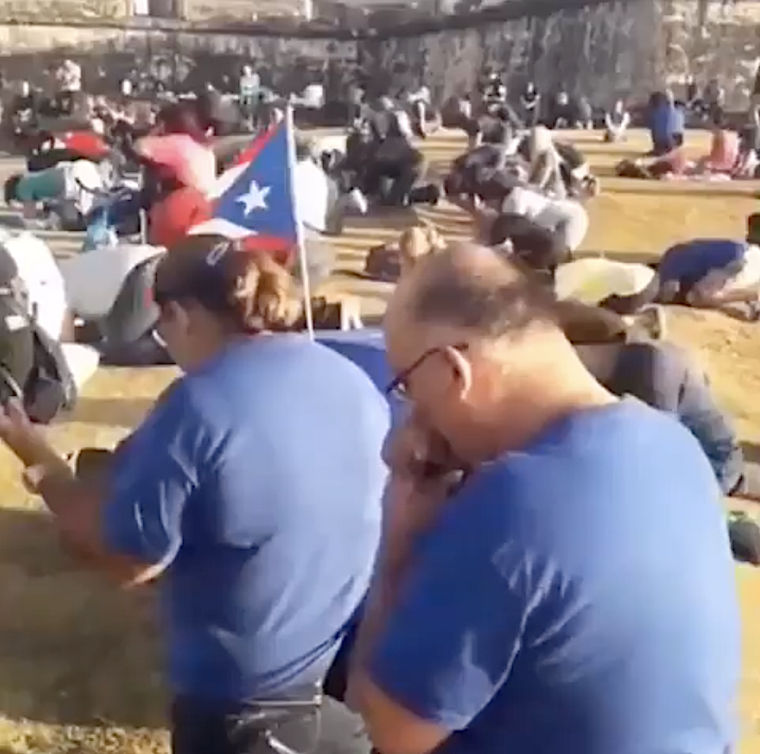 Hundreds gather in El Morro to pray for Puerto Rico, July 2019 | Instagram/PuchiColon
Hundreds of thousands have gathered in Puerto Rico over the last 10 days in protest, demanding that their governor, Ricky Rosselló, resign after a series of leaked text messages revealed corruption and mismanagement of the government.

The people of Puerto Rico have united to protest what the majority feel is a broken government that needs to be revamped. Among the peaceful demonstrations held, the people of Puerto Rico have uniquely gathered in song-and-dance, banged pots and pans, held yoga sessions, and held signs up while both sky diving and scuba diving. But perhaps the most powerful demonstration took place at the foot of their famous fort in San Juan, El Morro or officially Castillo de San Felipe del Morro.

A video posted on social media last week shows hundreds of Puerto Ricans on their knees at El Morro crying out to the Lord for mercy for their island.

“Forgive tribalist, if we’ve failed you in being contentious or for anything, forgive us, my God. We are a nation that loves you, Lord,” a man is heard praying on a bull horn in Spanish.

“Glory to God,” he continued while encouraging others to cry out to God.

Hundreds can be seen on their face crying out, speaking in tongues and praying for their island.

Worship leader Puchi Colon of Puerto Rican descent shared the powerful video on Instagram with the caption, “Politicians are corrupt but there’s a lot of righteous praying people in our Island. He ended the caption by quoting 2 Chronicles 7:14 which says, ‘If my people, who are called by my name, will humble themselves and pray and seek my face and turn from their wicked ways, then I will hear from heaven, and I will forgive their sin and will heal their land.'”

Others can also be seen holding hands in a prayer chain in the streets of Old San Juan.

Hundreds of thousands of people gathered throughout the island on Monday to demand Rosselló’s resignation. Those who have protested so far include celebrities Bad Bunny, Residente and Ricky Martin. The march outside of the governor’s office in San Juan marked the largest movement on the island since the Puerto Rican people spoke out to end U.S. Navy military training on its island of Vieques over 15 years ago.

The demonstrations began after a group chat on Telegram leaked on July 13, revealing obscenities against Hurricane Maria victims, the mayor of San Juan and the LGBT community. The conversation was between the governor and his allies.

The Rev. Samuel Rodriguez, president of the National Hispanic Christian Leadership Conference, along with NHCLC leaders also chimed in on the matter after Rosselló took to Facebook on Sunday with a video saying he intends to carry out his term as governor of Puerto Rico but will not seek re-election in 2020.

“As an American of Puerto Rican descent, I am extremely troubled by the recent developments in the commonwealth of Puerto Rico. Puerto Rico is much more than an island. Our blessed land continues to change the world with the arts, creativity, innovation and unbridled spirituality,” Rodriguez said in a statement shared with The Christian Post.

“Accordingly, the messages and chats emerging from the Commonwealth’s senior political leadership can best be described as reprehensible. For that matter, we, the NHCLC, hereby call upon the governor and his administration to take all the necessary steps to repair the damage and facilitate a political environment that fosters trust and serves reconciliation.

“Puerto Rico overcame Hurricane Maria. This land of enchantment will likewise overcome these repulsive chats. I welcome the news Gov. Rosselló will not seek re-election, yet Puerto Rico similarly needs to overcome corruption in its political apparatus, unfunded entitlements, uncontrollable debt and constant political gridlock. I pray that out of this crisis Puerto Rico becomes more united, invigorated by purpose and the promise that Puerto Rico 2.0 will be greater, in all metrics, than ever before. Puerto Rico, rise up, in Jesus’ name!”

Since the chat scandal, several top government officials have submitted their resignations. If he does resign, the next in line would be the justice secretary, Wanda Vázquez. The secretary of state, Luis Rivera Marín, would normally take up the position of governor following a resignation but he quit his job amid the uproar.